This is the first new release in about 3 months, but it's a major one that we're really excited about. In short,


This release of the practice service software coincides with the release of a new look on the Everything Maths and Everything Science websites. These sites do really look better than ever before, so head over there to have a look.

The level of mastery is our new method for indicating how well a user is doing. Mastery is measured on a 4-star scale and getting all 4 stars in a section or chapter means that you have successfully completed it.

We had complaints from users that the system was taking too long to give them more difficult exercises. It is now more aggressive in that it will give users at least a few difficult exercises earlier on and increase their level of mastery accordingly if they get those questions right.

New plots and stats on the dashboard show you how well you are progressing. All progress is measured on the 4-star level of mastery scale. Users can set a goal in terms of stars and monitor their progress through the book over time. 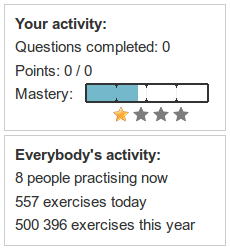 A mini-dashboard is shown while working on exercises. The mini-dashboard shows a user's progress in the current section or chapter and also shows how many other users are currently active on the service.

Other, smaller changes include the following

We addressed some issues with browsers on older mobile phones as well as older versions of Internet Explorer (now supported: IE8+).